So my two Grandkids wanted R/C cars for Christmas last year.
I remember the last time I bought them R/C cars they lasted a very short time before they were broken. It was a combination of buying cheap cars and giving fast cars to inexperienced R/C drivers.

Well this Christmas they were much older so I figured we might try something different.
I thought maybe I'd give crawlers a chance. They don't go as fast so the kids can't wreck them as fast!

So I went to my Local Hobby Shop and bought 3 ECX Tempers (Hey I gotta have one too).

These are really fun out of the box (and everything you need is in the box).

We played with them all weekend and had a ball crawling all over my backyard (I have a dry stream bed in my yard so that became the crawl zone).
Well after a few weeks I was bored with it being stock so I began to make some changes.
One change lead to another and well, here we are now. 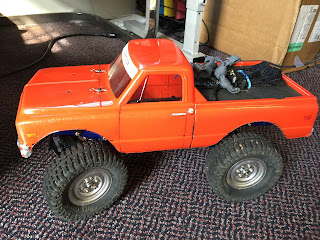 I began by getting a new body. Proline's 1972 Chevy C10 fit perfectly! It had the right wheelbase (the Temper is SHORT) and was a Chevy!! Proline does a really nice job with the decals and window masks too. 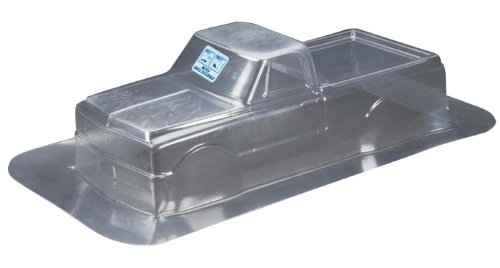 Next I wanted a new set of metal rims that would help keep this thing right side up! I found the GMADE 1.9 SR03 Beadlock Wheels (Uncoated Steel) and fell in love! These things are awesome. They are super heavy and look great!I got the unfinished ones because I wanted them to get a little rusty! They are also available in Black and Painted Silver. GMADE makes several types of 1.9 inch wheels and other cool crawling accessories too.

Next up, I needed some tires to put on them rims.
I found these cheap Chinese ripoffs of the "Dick Cepak Mud Country" tires. For the price ($14 for all 4 w/foam) I figured I'd give them a try.

These are AWESOME tires. They are exact copies of the "Dick Cepak Mud Country"  tires except they don't have the DC logo on them (Although they do say Dick Cepak on them). Super squishy, super soft, great traction tires.

So life was going pretty good and I was very happy with the performance of my temper.
Then I started really looking at some of the other "Rock Crawlers" out there and realized that there was more to this sport (R/C Rock Crawling) than just climbing rock piles.

Ok, now I wanted a Trail Truck. I could have just saved another $200 and bought an ECX Barrage

Which is a wicked little truck in itself.
But I had already invested time and money into the Temper so I decided to try and convert my Temper into something like the Barrage.


First thing was to get rid of the TVP (Twin Vertical Plates) chassis and get some sort of ladder frame like an Axial frame. But $100, that was just to pricey for me.

Then I found the Integy Frame in Blue for $20. SOLD!
It looks awesome and for $20, if I screwed it up I wouldn't cry!

And I started taking pieces off the Temper and moving them over to my new frame. There was definitely some modifications that needed to be made to make it all fit.
I had to drill a few holes in the frame, relocate the Shock mounts for a shorter wheelbase and modify the upper linkage some, but it all fit quite well.

In the span of 2 nights I had completed the swap over and had my new Ladder Framed Temper running.

I realized that the wheels where too close to the frame and I needed to move them out a tad. I was able to find some very small offsets for the wheels (only 8mm) to make it a little wider without destroying the overall scale look of the truck.

This provided the clearance I needed to keep the tires from rubbing and gave the truck a slightly wider stance to keep it from rolling over too easily.

Next is a set of Barrage Bumpers and lights. 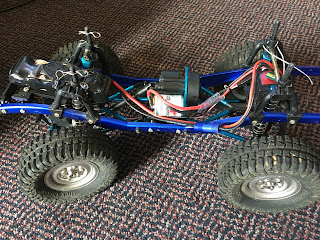 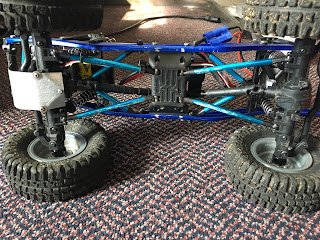 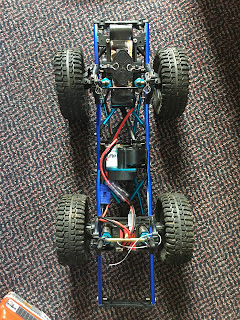 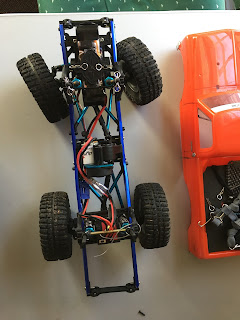 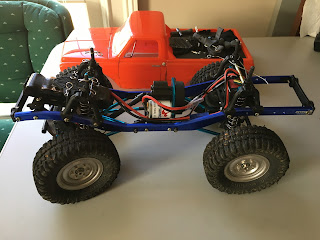